Frohawk Two Feathers Exhibition at the Hudson River Museum confuses you on New York history by creating this exhibition surrounding facts and fiction of events or symbolism with humor and sarcasm that is scattered and uneven. His vision seems distant and imaginative beyond what our minds could understand. Which in this case at first, made me distant from the artist and his works. Maybe the works are too distant, considering how I was the first visitor after the museum was already opened for 3 hours. I gingerly walked around Frohawk Two Feathers’ exhibition hopelessly inspecting each painting’s element contributing to the whole concept on the exhibition.

His works are modern and very attractive to today’s view on art. Frohawk Two Feathers’ work is surreal and unbelievable, yet it may seem convincing that these fictional portraits of historical people or events may be true – if that makes sense. This is where Frohawk Two Feathers confuses his viewers which consequently may turn some minds off. For example, he adds Egyptian scripts or symbols within portraits or events that are not remotely relevant to the subject, or he paints ‘Frengland’ (a fictional combination of France, England, and Ireland) soldiers in 1790 posing and lined up like football players taking a picture which doesn’t make sense because the earliest photograph didn’t exist for another 50 years, furthermore the figures’ poses were non-existent in art in its time. The main centerpiece of Frohawk Two Feather is a colossal wooden figure which stands in the center of the exhibition; peaking above the top level of the museum. Nearly 2 stories tall, the two- headed horse figure is free standing. It is composed with a solid internal structure, yet looks fragile from its neatly nailed in but cheap wood cuts on the exterior. In addition, there are multiple small humanlike figures standing within the huge horse figure. Thus, it stimulates wonderful debate on the purpose of its existence and the contribution to the exhibition. It reminds me of the tale of the Trojan War, where the Greeks tricked the Trojans by smuggling their soldiers in a large wooden horse, resulting in the fall of Troy. The colossal horse seemed off from the other works of paintings surrounding it; nonetheless impressive in size and detail.

The more I sat there confused, pondering, and glancing around the exhibition, the more I started to understand the reason for these works of art. They are fun and imaginative. This is because the pieces do not make sense but that does not mean that the viewers don’t have a connection to the painting of figures or events. Each work is unique and fun to gaze upon. Some works will turn people off, some will make people giggle, and some will make people ponder it for an excessive amount of time. Frohawk Two Feathers’ exhibition explores our curiosity and challenges our imagination by creating fictional stories, or portrays factual events or persons in fictional hidden symbolisms. Although the exhibition and works are confusing, brain numbing, or unique, nonetheless Frohawk Two Feathers’ Exhibition is still a worthwhile reason to get out of the house and face the gloomy winter of the Northeast.

The Hudson River Museum is small gem in the state of New York. There is a sense of distance from the population and industrialization of Yonkers, even though its stands next to the Hudson River’s densely populated river bank. The modern white framed entrance creates a welcoming vibe to this hip modern city, however with a touch of the old greatness of the gilded ages of New York with the Glenview Mansion behind. Along with Frohawk Two Feathers’ work, the museum still shows traditional arts and a personal tour within the sublime Glenview Mansion. It is a shame to see this big city museum empty and it reflects on Frohawk Two Feathers’ unorthodox ideas being distant to the current ideas within the lower Hudson River community.

Frohawk Two Feathers: Kill Your Best Ideas, The Battle for New York and Its Lifeline. 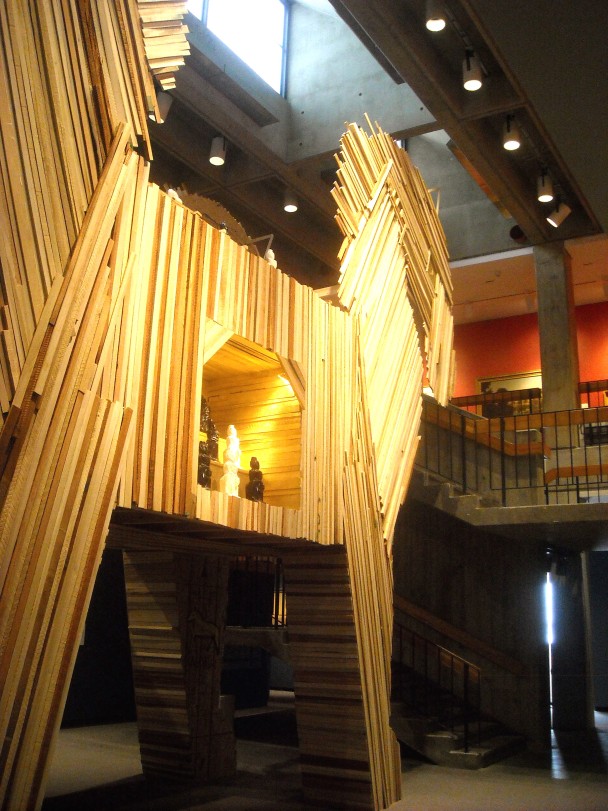